Kinda been a bit off the grid as blogs go.. but I’m still about.

Current doings are: fixing up some retro computers, namely the ZX-Spectrum (pronounced Zed-ex >:0 ) 48k. got 3 of them. 1 works but only the lower 16k of ram, the upper fails so I’m working on tracking down what ram chips are failing there. The 1st one seems to be a culprit so far.  Also need to replace all the capacitors as the current ones are olde and i think they are part of the failures. since the machine crashes after a while of operation, and iit has to warm up before it will take ‘tape’ input (using phone to play tape files direct to the speccy). 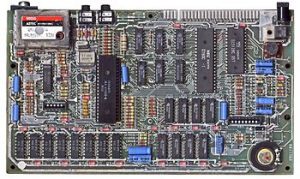 The other two appear to have ram problems since they do not boot but are showing video signal so the ULA chip is at least working. one has had new caps fitted already but the other needs new caps before further testing. awaiting some parts like ram modules and chip sockets and 2 sets of replacement capacitors.

More to come as this project progresses 🙂

The blog may go through a bit of a redesign at some point too..